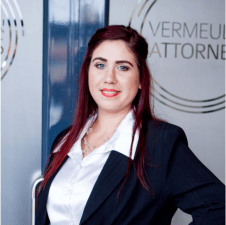 Chante Mouton attained her law degrees (BA Law & LLB) from the University of Johannesburg in 2011 and 2013 respectively. She commenced her articles of clerkship in 2014 and was subsequently admitted to practise as an attorney by the North Gauteng High Court in 2016.

Chante joined Vermeulen Attorneys in 2017 and was admitted to appear in the High Court by virtue of the Right to Appearance in Courts Act 62 of 1995. Since then she has been appearing in the High Court and Labour Court on a regular basis.

Chante frequently appears in the CCMA and Labour Court. She has also accrued a wealth of knowledge in the fields of litigation and family law.

Vermeulen Attorneys
5.0
Based on 9 reviews
See all reviewsWrite a review

Cindy-lee Payne
10:50 15 Oct 18
would like to thank Kaylee and Cathleen for an awesome service. friendly and very professional.would definitely recommend their service

Why Debt Collection Remains A Necessary Expense : In a company faced with a multitude of financial obligations the added expense of legal fees paid towards recovery of bad debt seems like a double punishment. Having an outstanding debt and paying more money towards collecting it seems like throwing good money after bad. In some circumstances […]

Is There More To Debt Collection Than Just Running To Court?

The short answer is YES! (Debt Collection Running To Court) – The collection of debt does not necessarily mean that you have to go all the way to Court, and more importantly, there is more to debt collection than only collecting the debt when it is outstanding. Let us start with methods of collecting other […]

Vetting is a process followed in which as much information as possible is gathered about the debtor being handed over, in order to ensure the maximum potential for a good result to prior to legal action being instituted. The rationale is that, if you know your debtor is the owner of a block of flats […]

South African law dictates that in order for an agreement to be recognized as a valid and binding contract, it must meet certain requirements. These requirements are as follows: There must be consensus between the parties The parties must have intended for the agreement to result in terms which can be enforced The necessary formalities […]

Declaring a director delinquent in terms of the Companies Act. If a director conducts himself or has previously conducted himself, whilst being a director of a company, in a manner which is inappropriate, an application aimed at declaring such director a delinquent, may be brought. This article aims to explain who may bring such application, […]

Credit Records – What Is It All About?

The change of position for women previously discriminated against in customary marriages Cabinet in July 2019 approved the submissions made on the Recognition of Customary Marriages Amendment Bill of 2019 to Parliament. The approval of this Bill is said to be a major win for women who have been discriminated unfairly against in customary marriages […]

Help! I am flagged as being under debt review on the Credit Bureaus. Since promulgation of the National Credit Act. 34 of 2005 (herein after referred to as the “act”), most South Africans have heard of debt review and have a faint idea of what it entails. Some of us have encountered financial difficulty and […]

How To Enforce a Maintenance Order

Gender-based violence (hereinafter “GBV”) is an intense and widespread problem in South Africa, impacting on almost every aspect of life. What is gender-based violence? GBV is broadly defined as “the general term used to capture violence that occurs as a result of the normative role expectations associated with each gender, along with the unequal power […]