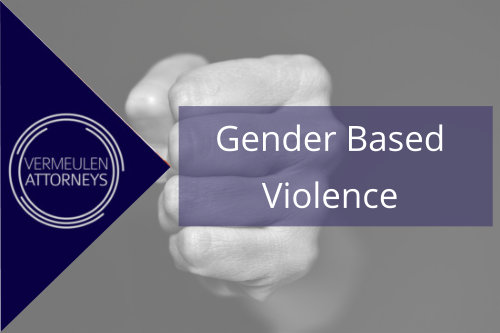 Gender-based violence (hereinafter “GBV”) is an intense and widespread problem in South Africa, impacting on almost every aspect of life.

What is gender-based violence?

GBV is broadly defined as “the general term used to capture violence that occurs as a result of the normative role expectations associated with each gender, along with the unequal power relationships between genders, within the context of a specific society.”  It can easily be said that GBV occurs as a result of normative role expectations and unequal power relationships between genders in a society.

Patriarchal power structures dominate in many societies, in which males are seen as leaders and hold majority of power. As a result of this men are treated as superiors to women, where women cannot protect their bodies, meet their basic needs, participate fully in society and men perpetrate violence against women.

Forms of gender –based violence:

GBV can be perpetrated by intimate partners, acquaintances, strangers, and institutions. Most acts of interpersonal gender-based violence are committed by men against women, and the man perpetrating the violence is often not a stranger to the woman.

South Africa has high rates of GBV, with many that are unreported due to fear of being judged by the communities and the loss of trust our people have in the legal system to fully listen and protect the GBV victims.

What drives people to commit GBV?

There are a number of factors that drives GBV; but gender power inequality rooted in patriarchy is the primary driver of GBV.

GBV is more prevalent in societies where there is a culture of violence, and where male superiority is treated as the norm. A belief in male superiority can lead to men feeling entitled to women, strict reinforcement of gender roles and hierarchy (cultural), women having low social value and power, and associating masculinity with control of women, low levels of women’s empowerment, lack of social support, socio-economic inequality, and substance abuse.

In many cultures, men’s violence against women is considered acceptable (within certain situations); this social acceptability of GBV makes it challenging to address GBV effectively.

GBV is a human rights violation with major social and developmental impacts on survivors, as well as their families, communities and societies.

According to Statistics South Africa, the economic impact of gender-based violence is estimated to be billions annually.

GBV is a serious problem which is faced by many South Africans within their daily lives, but is hardly spoken about. If it happens that you, unfortunately become a victim of GBV or witness GBV, kindly contact our offices in order for us to assist you in gaining the appropriate protection.