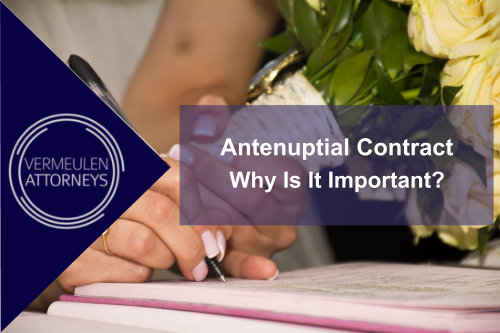 WHY IS IT IMPORTANT FOR COUPLES TO SIGN AN ANTENUPTIAL CONTRACT

Every girl dreams of the day they meet their prince charming, that he will sweep you off your feet and you live a happily ever after. In reality, even though love and marriage are special, it does come with many legal implications that often couples who are madly in love overlook or try to avoid. One of them is picking a marriage regime that will suit your relationship and finances. Truth is no couple ever gets married to get divorced and many newlyweds base their choice of a marriage regime on the concept of “forever” rather than the practicalities that come with managing finances in a marriage on a daily basis. A common false misconception is that getting married out of community of property is the equivalent of preparing for divorce. The truth is, the biggest benefit of getting divorced when you are married out of community of property is that you don’t need to share your assets with the person that you do not like anymore, but a divorce is never easy.

WHY IS IT IMPORTANT FOR COUPLES TO SIGN AN ANTENUPTIAL CONTRACT?

Signing an ANC means that the couple has total control on regulating the terms of their marriage.  It gives the couple power to choose how their assets should be dealt with in case of divorce or death. It gives each party in the marriage independence of contractual capacity, meaning that you may enter into loan agreements or finance the car of your dreams without your spouse’s signature. In the instance where one spouse if financially reckless, the other party’s assets are protected against the claims of the reckless spouse’s creditors. If one spouse becomes insolvent or judgment is granted against him or her, creditors may not attach the assets of the other spouse, which means that you do not lose everything if one spouse makes a financial mistake. This is further beneficial if you have children, as the floating spouse is able to assist until the sinking spouse gets back on their feet. Each spouse is liable for their own debt and you do not have share the debt that they may have acquired even before they met you.

WHAT IS AN ANTENUPTIAL CONTRACT?

This a contract which is entered into by a couple prior marriage where community of property and profit and loss are excluded. The couple may include any terms and conditions of the financial consequences of their marriage, as long as the provisions are not against the law, good morals or the nature of the marriage. This is why couples need to consult an attorney to assist them in understanding which provisions they may put in the contract, why and the consequences of such provisions. The ANC registered at the Deeds Registry after signature thereof..

There are two types of ANC that couples may sign. The first is an ANC that excludes the accrual and an ANC that includes an accrual.

WHAT IS THE ACCRUAL?

The accrual is the extent of financial growth or wealth each spouse accumulates during the marriage. An ANC that excludes accrual means that each party retains what they acquired before and after the marriage and when it includes an accrual it simply means that each spouse retains their financial positions before marriage but whatever acquired during the marriage is shared in terms of the accrual system. The value of the smaller estate is subtracted from the larger estate, and the spouse showing a smaller accrual shall be entitled to half of the difference of the two accruals.

HOW CAN A COUPLE CONCLUDE AN ANC?

The couple needs to consult with an attorney which will provide them with a legal opinion on the various regimes and clarity on the implications of their choice on a marriage regime. After an election of the marriage regime by the couple, the Attorney will draft an ANC based on the instructions given. Once this is done both parties and the attorney must sign it and it is than taken to the deeds office in the area where the parties reside in. the ANC is usually effected within three months of the date it was signed. A prescribed fee is payable in the deeds office for the registration of the ANC.

If you are planning a wedding but have not given the ANC any thought and need assistance in this regard, please do not hesitate to give our offices a call. We shall gladly assist in this regard.